At last – the English version of my memoir/book is finalised! It is now available in my online store, and you have the opportunity to purchase a written copy at a bargain price of 9.90 Euros.

If you are interested in purchasing a copy, please send your enquiry to: hilde.jacobs@gmx.de

Receipt of your details will be confirmed promptly and accompanied by payment terms and steps to be undertaken in the purchasing process. Upon clearance of your payment, you will receive the entire book “Orient meets Occident” as convenient pdf version.

Sincere feedback about my memoir would be greatly appreciated - wishing you a joyful read. 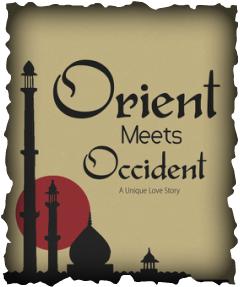 Sometimes a young and friendly man from the airport security, who was called Mr. Ahmed, invited me to the tower. In the night you could see the illuminated airport with all its lights and blinking below, and the interior of the tower itself had at least as many colourful little lights to compete with. It was a fascinating spectacle to witness.

One day Mr. Ahmed came up with the idea of showing me his little house, which was close to the airport.

When we entered the bedroom whilst being shown around, he did not beat around the bush, threw me onto the bed and attempted to undress me. I was appalled to see a wet spot on his pants and screamed panic-stricken for help – in German! Of course nobody came to my help. My thoughts were racing through my head, and although I was in panic, I realised soberly that he might not be of any imminent danger anymore as he had obviously ejaculated already and might not be able to have another erection. He repeatedly pretended to call two other friends “Mohammed and Kamal, come over here!”

I shrugged and terror gripped me in the thought of having two more men launching themselves at me, but I realised soon that it was a trick he was playing on me! I struggled wildly and started to cry more of anger than fear. When he covered my mouth with his hands because I was creaming for help, I suddenly bit him so hard that he screamed loudly and let go of me.

I must have been in shock as I would have otherwise not wasted any time in yelling at him and showing him my ripped watchband, but would have run off instead.

Grappling my handbag I finally ran into the night, and ran, and ran, and ran through dense undergrowth and thorns, stumbling over foxholes and hills until I ran into a boy. I pleaded for his help only to realise that he also tried to hold me and thought it amusing to proceed with the deed Mr. Ahmed could not finish. As he was only a boy, I easily pushed him back and kept running into the direction of the main road until I finally reached the bus stop in trance. I was finally safe and was able to calm down and gather myself whilst sitting on the bus.

Had this really happened to me? Or had it only been a bad dream I had just woken up from?

I kept it a secret what had happened that night and went on with my daily life in Karachi, until Alexander came for a visit. Alarmed he exclaimed, “Oh my god!, and we set out to the airport to see Mr. Ahmed. I waited outside the office on a bench in the hallway. When Alexander stepped out again, he literally said to me that he had given this man a message he surely would not forget in a long time.

Why did we not go to the police? Well, because in many countries, Pakistan included, you do not take such an incident to the police. Pakistani policemen can be corrupt at times and, different to Germany, they do not always behold themselves as ‘Officer Friendly’. Also I did not want to make a fuss about it all as I most likely would have been mocked around by my colleagues.

One thought that makes me shudder nowadays is the questions of what would have happened to me if Mr. Ahmed’s intend of raping me would have been successful? Would I have been stoned or dragged before a court to be judged by four male witnesses as per custom in Pakistan when a woman is raped?